I know we’re spoiled living here in Hawaii. Our blood thins in the tropics, and when the temperature dips to 73 degrees, I’m reaching for my iPhone because I want to know how cold it is! Lately, the weather in Hawaii has been super windy. One of the guys I follow on Twitter, @newmediajim, is in town with POTUS. A lot of media are connected to President Obama whenever he travels, and Jim is often one of the cameramen capturing the moments. When he had tweeted that he was in Hawaii with POTUS, we had a little exchange:

67Jim Long @newmediajim@lavagal wow!!! We went to the Pali Lookout… CRAZY windy!!
Last night, on our way home from our family Christmas celebration in Kaneohe, my hubs John and I discussed our workout plans for today, since it was a federal holiday and I wouldn’t have to work. John put new hoops and tires on my Scattante and I was eager to try it. But I am also in week 14 of #5kin100days, the last week, and so I also wanted to do that workout, too.
I did both! Ryan Suenaga would have been so pleased for me! I thought of him often today while I was riding and doing my run. 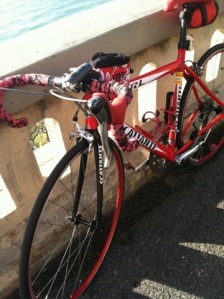 John wanted me to try out my bike before he took off on his run, so I went out and left. He had put new Velocity red Aerohead wheels on it, and replaced the red Conti’s, which we found aren’t very hearty, with black ones. He wanted to be sure the brakes were OK. I had put the Garmin sensor on the rear wheel, and I got it right! But when I launched, I realized that I had forgot to bring my water and my ginger chews, and I didn’t get coffee or breakfast. I had a drink of water at the Kahala Aloha Tesoro station at the water fountains outside the building.
Riding in the wind is such a butt kicker. You cannot hear anything but the wind whistling by your head. You have to be really careful about the cars around you. I wear a little mirror on my sunglasses to see what’s over my left shoulder, and it saves my life. I know it looks dorky, but I can’t worry about that. I just want to survive. Drivers today were really gracious. I had a good ride, and most of the other cyclists I encountered were very nice, too.
When I got home, I said to John that I had to get right back out and do my 14.1 run because I was feeling really energetic. I knew if I took a shower, I’d get dressed and head to my chair, and that would be it. And you know what? It would have been OK. One workout a day is all any mere mortal is expected to do. But now that I’m training for quite a few 2012 multi-stage events, I need to get used to doing more than one thing on at least one weekend day.
The run was 3×13 minutes after a 10-minute warm up and followed by a 5-minute cool down. I did 3.67 miles, clearly a 5k. I think we can say that I can do a 5k now. I hope I’m not ever DFL!
POTUS and FLOTUS haven’t cramped my style much during their stay. I actually like it when they’re in Hawaii. President Obama went hiking up by the pill boxes above Lanikai today. Local style! That’s a tough hike! He also did some posing with military families, and even let little kids tug his ears and stick their fingers in his mouth. The Dude Abides.

One thought on “Double Workout Day”

This site uses Akismet to reduce spam. Learn how your comment data is processed.