I’m a weekend warrior on my bike! 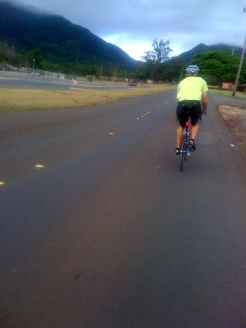 The glow in the gap beyond John is Kolekole Pass.

Rick, in red, and Bobby, in TDF yellow, were our expert and enthusiastic guides.

Linda, Patricia and Shirley at the top of Kolekole Pass. 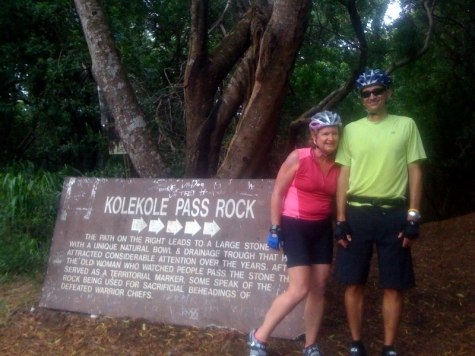 At the top of the pass is a legend about the beheading rock. Ouch!

Thanks to my husband I’ve become a bicycling enthusiast. I now mirror his admiration of Lance Armstrong and his addiction to the annual Tour de France. He commutes on his bicycle from work evenings and still recalls fondly his banana-seat Schwinn Stingray from which he delivered newspapers in Hawaii Kai.

A few months ago my husband John decided he wanted to ride in the Honolulu Century Ride, with me. All 100 miles of it. Just as he did when he wanted us to start a family, he had to present his case to win me over. It wasn’t that hard of a sell. Years ago I had commuted on my bicycle to University of Hawaii Manoa from our downtown condo, and I got pretty confident about urban bicycling.

Recently, he had built me a bike. It collected dust. I’d reluctantly get on it once in a while to do my time, but I thought it was so boring. I would rather rise at 330 a.m. to work out on the elliptical at 24 Hour Fitness Hawaii Kai than ride a bike on a trainer at the end of the day. I was too tired.

To be sure I’d be ready for the century, he encouraged me to  join a group. So far, I’ve been on three group rides. Two were from the Kahala area to Hawaii Kai. I haven’t ridden with the same person twice, I’ve gotten to ride with some interesting people, but there isn’t much talking going on. Sometimes I’m faster than others, sometimes I’m slower. It’s all about the training, getting used to sharing the road with whizzing vehicles, dodging road debris, gutters and bumps, staying alert. It’s also about courtesy and acknowledging the goodwill of those wrapped in a few tons of steel. There can never be too many gracious drivers on the road. A mahalo and a shaka can take you quite a few miles.

This past Saturday, August 1st, it was a very different ride for me. We biked from Kunia to Kolekole Pass on the Army military base Schofield Barracks. About a dozen of us parked at the Kiss and Ride in Waipahu and, after a briefing from Hawaii Bicycling League enthusiast Patricia Johnson, we were single file on Kunia Road by 715 a.m. My husband and I were in a slow group and I was itching to do a breakaway. I had no idea what I was in for so I decided to let the others set the pace, conserve my energy, and overlook my frustration of riding slow. Besides, I wasn’t familiar with Kunia Road at all, and the 45mph speed limit meant cars and trucks were probably doing 60mph.

Once we got in the gate at Schofield Barracks, it was like being in another world. The road was calm, very little traffic, and we were able to relax and go as fast or as slow as we wanted. The military has its act together. I served in the USAF and a military existence is a parallel world. For a civilian on a military base, it can be an amazing eye-opening experience. There is no litter. There are no dogs running around. There is no broken glass on the road. Military uniformity includes not only one’s gig line, but the well-manicured environment of an installation.

We didn’t worry about getting a flat tire on base! According to Bobby, who was dressed in TDF yellow down to the lions on his socks, his GPS told of the inclines we encountered during our climb up Kolekole Pass. He said we rode up inclines of up to 12-13 percent!

I watched as my husband, Charley and Rick pedaled into the distance ahead of me. I even took their picture with my iPhone. I wanted to see if I could shoot a picture without dropping my iPhone, without falling on my right knee, my favorite place to land. The scenery was gorgeous and the eucalyptus trees cleared our sinuses with their minty fragrance.

As I was heaving up the hill, alone, having fallen behind the three guys but ahead of the rest, I was slowly passed by a military police car. I was worried he was worried about me! Then John came rolling back down. He said he thought I was right with them. I don’t know if he heard me scoff or what! He then said some encouraging words: “See that light there? That’s it. That’s the top.” We got there sooner than I had thought!

My heart rate climbed to 171 as I climbed those last several hundred feet, but we were there sooner than I had expected, and that is always a stress reducer! When it was time to go, John and I flew down the pass on a virtually deserted road, no cares about broken glass or fast vehicles or wild dogs.

It was a total wheeeeeee.

The ride back — out the gate to Kunia Road, south to the Kunia Wal-Mart, was as hairy going as it was coming. This time John and I were in the front with Rick, drafting behind him. It was amazing. The road was bumpy and I did get stuck in a concrete gutter for a bit, but we were able to maintain a good speed. I didn’t fall during the entire 28-mile ride.

I absolutely love riding my bicycle now. I look forward to those weekend group rides, getting comfortable riding on someone’s wheel, in traffic, on roads that more often than not are loaded with debris where the bicyclists ride. I like the sound of my shoes connecting with my pedals, the sound of gears shifting as our peloton straddles Heartbreak Hill. And I love the thought of alert, considerate drivers sharing the road with us.

View all of lavagal's posts.

This site uses Akismet to reduce spam. Learn how your comment data is processed.